We’ve known Stuart for the better part of 25 years and it’s with great pleasure that we welcome him as our next ambassador. Stu’s upbringing would seem familiar to many of us – camaraderie and competitiveness living side-by-side, excelling at sports, and gazing out the window during class.

He was ready to take the next step with a traditional career path – and was stopped in his tracks. Stu contracted jaundice, sapping his energy and sentencing him to many months in hospital.

“Being broken down to your most exposed self, forces you to re-evaluate. Leaving the hospital with so much doubt about the future moulded a sense of new being. It was a chance to begin again”. 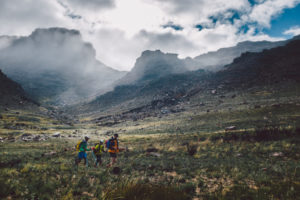 Stu realigned his life so that the right things were prioritised. The first of which was regaining his strength by spending time in Newlands forest with his faithful companion Fergus (a scruffy Airdale Terrier). His plan worked, and within a year he miraculously earned a silver medal completing the Comrades Marathon in 7hr25! This was his turning point.

“I quit my job and decided to see what would happen. I then saw an ad posted by Nic Bornman (an old school friend) for Ultra Trail Cape Town and I immediately wrote to him. I knew this was my reason, my chance”.

Since then Stu has put in the hard yards, building an incredible community (of all shapes, sizes and speeds!) that love to run in the mountains – from weekly gatherings such as Tuesday Trails with routes ending in an ice cold beer, to events like Ultra Trail Cape Town, which sits firmly on the world stage. 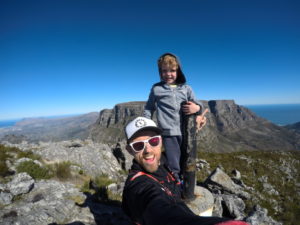 In his spare time, Stu can be found exploring the local wilderness, often with the love of his life, Jasper (his 6yr old son), or with his crew of hardened “Cederbergies,” fast packing through big mountains come rain or shine – bagging peaks, overcoming fears and breathing nothing but pure stoke.

We’re so honoured to be a part of Stu’s story, and are genuinely inspired by his love of life. He truly lives by Madiba’s words: “There is no passion to be found playing small – in settling for a life that is less than the one you are capable of living”.