“The body, just like the canvas, provides guidelines, limitations and inspiration for any artistic project. The aim is to create flowing compositions which complement, move and live well on the human form. You can’t take back any move, you need to be bold and certain with every mark, brushstroke or line on skin.”

At first glance Warren is a tattoo artist in a sea of tattoo artists, relatively understated and relatively unassuming. It’s only when you inspect the quality and elaborate detail of his work that you start to understand why he feels that the work should do the talking.

Warren’s background is a collision of traditional fine art with modern street culture, making for provocative and often mythological artworks on ‘living, breathing canvases’. We’ve had the pleasure of partnering with tattoo artists in the past, but Warren stopped us in our tracks, and had us re-think the whole notion of this art form, and the passion and motivation behind the ink. 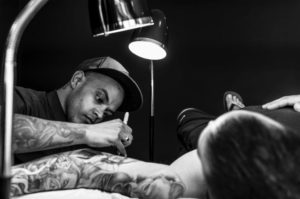 Over the years Warren’s approached his life with an entrepreneurial spirit. He’s been successful on many levels and continues to create wondrous large scale tattoos in the form of sleeves and full body suits. But it’s his future that’s really excites us. It’s as if he has an inextinguishable guiding light, urging him to pursue what he calls ‘creative living’.

“Creative Living basically means being the artist to your own life, using your own life as the medium. So the philosophy is, finding interesting ways to curate your dream lifestyle… to ultimately pursue a life of self-mastery on the road to becoming the best version of yourself”. 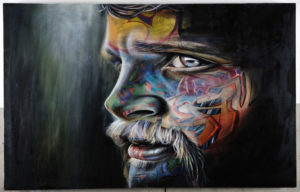 In a show of further commitment to this ‘creative way of living’ he also refers to his alter ego, Baked Ink. The idea behind the word ‘Baked’ is representative of the creative process; from conceptualisation to execution, with ‘Ink’ honouring the love of both pen and tattoo ink as tools of artistic expression.

Warren’s undoubtedly going to work out a way to flex his creativity across multiple mediums, from illustration, to painting, to food, to music, all with an experiential element that talks to originality. And he wants to inspire others to do the same. He’s determined for the next generation to appreciate, cultivate and master their own creative talents. We can’t wait to see what unfolds and we’re genuinely excited to support him.